The Source, or as they say in French, La Source, is a Canadian company that originated as a branch of RadioShack. Since the retailer’s birth, they have changed management and grown into the impressive brand it is today. They are well known amongst Canadians for selling electronics and their accessories. The quality of the company’s products is high, but thanks to The Source’s weekly flyers, their prices are not.

Latest flyers and promotions - The Source 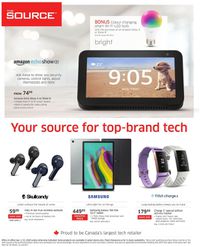 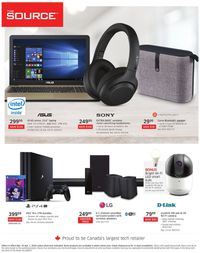 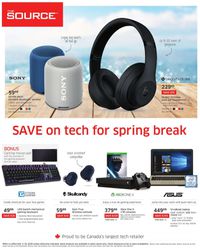 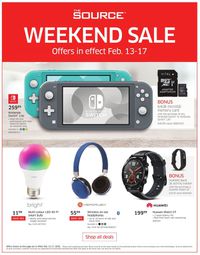 All About The Source Stores

Older generations may have known this retailer as RadioShack Canada, which is what it was called from 1986 to 2004. In 2004, it changed its name once more to The Source by Circuit City before settling on simply The Source in 2009. Today, they are owned by BCE Inc. and are headquartered in Barrie, Ontario. They have survived in their rapidly changing market by developing alongside technology to satisfy their customer base.

What People Buy At The Source

The Source is popular for home and workplace electronics, as well as electronics and accessories that you can take with you on the go. Below are some of their most frequently shopped departments:

These are just a few of their departments too – they sell much more. They also have a clearance section you can navigate directly to if you want to save a bit extra.

Which Products Are Often Promoted At The Source?

A wide variety of products can be found among The Source’s discounts. Usually, their more popular sales include those on big electronics, such as televisions, smartwatches, and other high-end technology. However, they do frequently hold sales on technology accessories as styles and trends change. They also put older versions of technology on sale as new models of products are released onto the market.

Best Sales Ad From The Source Every Week!

One thing about technology has always been true – its retail prices are expensive! The newer technology is, the higher its cost usually is. If you want to up your tech without emptying your wallet, try checking out Rabato’s weekly flyers. Gone are your days of tediously searching the depths of the Internet for discounts. Rabato’s flyers are always up-to-date and save you time by putting all of the best deals in one place.