Are you living without Safeway offers & store-discounts in your life? That’s no way to live!  The feeling of saving money when you shop at reduced prices is unmatched. Now, if you shop at Safeway, there are several ways to spend less and get more value. What you save could go towards your vacation savings or money for a rainy day.

Shoppers visit Rabato.com each week to view the latest Safeway weekly ads and sales flyers. The brochures are usually packed with special deals and promos from cover to cover. First though, here is everything you need to know about Safeway, so you can clutch its greatest deals. 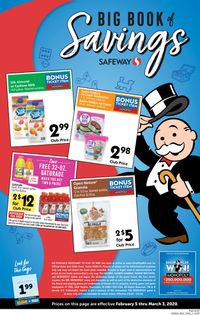 Safeway is a tale of two companies. Roughly 100 years ago, shopping for groceries was peculiarly different. Customers would shop for products on credit. As a result, the shopkeepers charged more because they had to endure long wait-times before they got paid. The result was an unhealthy dependence on merchandisers.

Marion Barton Skaggs’s father, a Baptist minister, detested the system and establish a store of his own, where customers came to shop with cash and left with their goods. Skaggs took over his father’s store in 1915 when he bought him out for about $1000. With support from his brothers, they grew the business to 428 stores in the next 11 years. Skaggs attributed his success to the “cash and carry system.”

The second tale is that of Sam Seelig. He got his start in 1912 with a single store in Los Angeles and grew it to 71 stores 10 years later. Following the first world war, the company was heavily indebted to its main wholesaler. The wholesaler’s proprietor Weldon assumed control of the Sam Seelig Company, and in 1924 Seelig left to start a real estate company. After leaving, the company’s name was changed to Safeway.

What Can You Buy at Safeway?

You can find a wide range of items. But do shop for their meat. In fact, you’ll get your money back if you’re not happy with the quality or freshness. This tradition is over 80 years old. On top of that, you’ll find some great offers on meats, sometimes 50% off.

Also, look out for their dairy products with organic milk and cottage cheese available. There is also a wide selection of fruits and vegetables. They also have a pharmacy section where you can refill your prescriptions.

How to Save Big at Safeway

It makes saving a bit easier. To clip coupons, you’ll just digitally add them to your card. It also tracks gas rewards.

2) Save with Friday Deals

These Safeway deals allow you to save up to $5 on organic products, produce, and more. The deals might also come with 2X reward points for every dollar you spend.

With 100 points, you can shave off up to 10 cents per gallon. Basically, spending $1 on groceries earns you one reward point.

Get the Safeway Current Catalog

Flipping through a catalog takes minutes. And you’ll be rewarded with amazing & secret deals. Stay ahead of the pack by viewing their current brochure at Rabato.